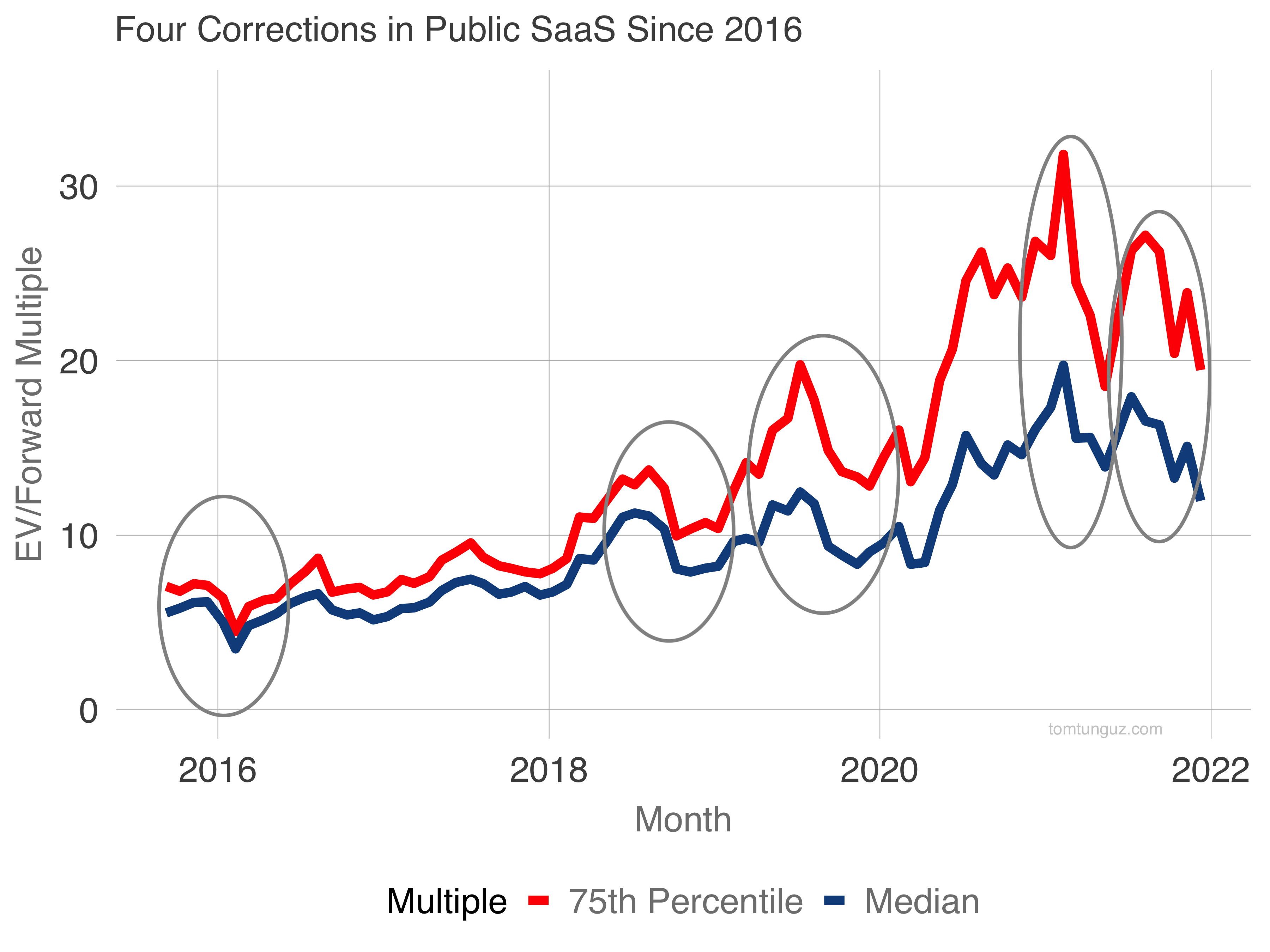 This chart shows the median and the 75th percentile of enterprise value/forward revenue multiple for the basket of public stocks which were public at that moment in time.

These corrections reduced valuations by between 30% and 60%. These undulations are short-lived. The market recorded new highs often within four to six quarters after the nadir. The net result is multiples have charted a volatile course with a positive slope. What a growth investor ought to expect.

In fact, the 75th percentile multiple has appreciated 25% annually since 2016 and the median has increased by approximately 20%. Cloud companies’ fast growth multiplied by an appreciation in multiples has pushed valuations higher since 2014. 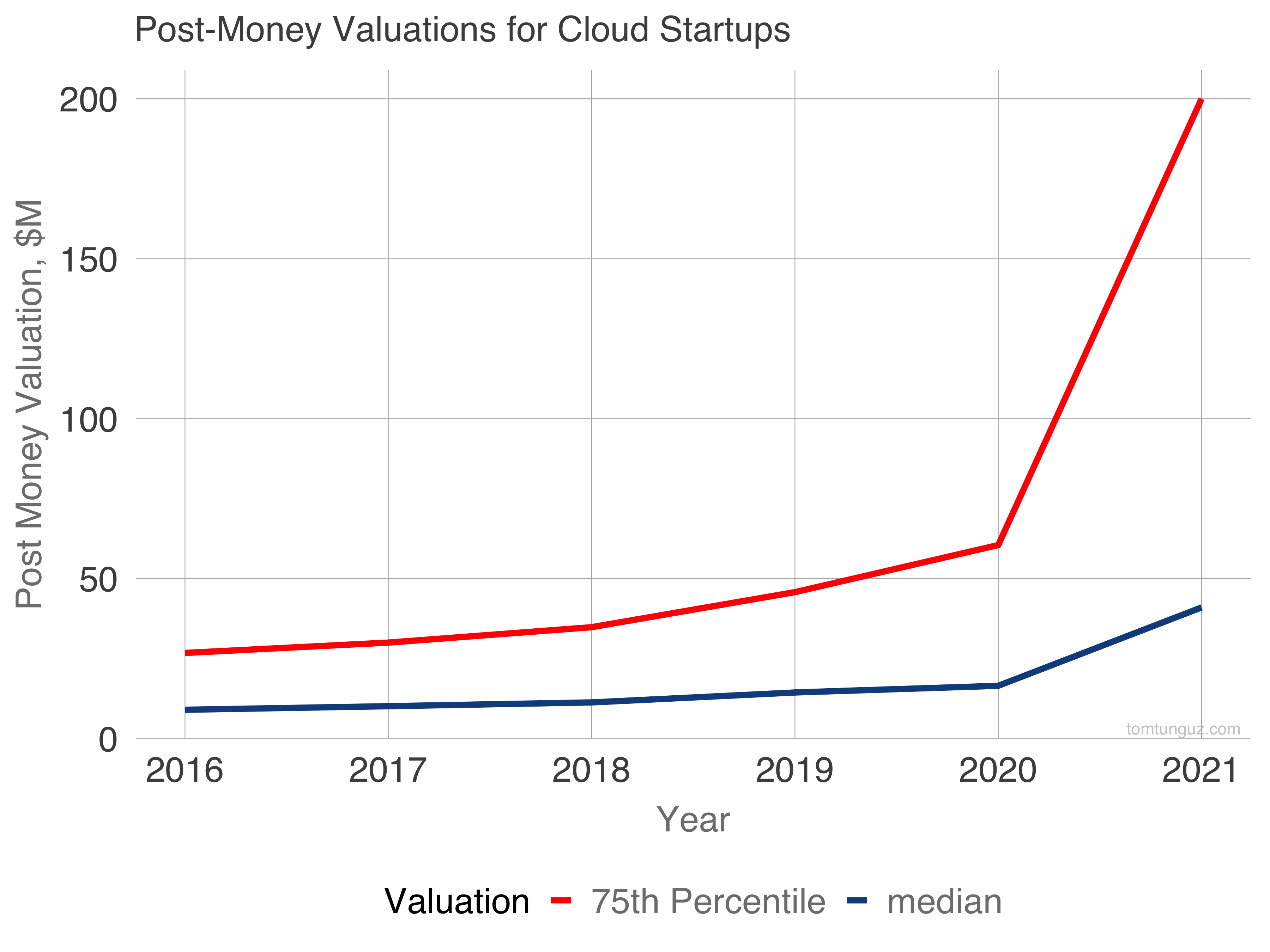 2021 changed all that – no fancy analysis needed! The hockey stick is a discontinuous event. Perhaps investors have been undervaluing companies for the last two decades. Or perhaps we’ll see some reversion to the mean. When is anyone’s guess.

Reading these data, the natural question is what is an accurate forward multiple for a company? The answer is it depends on an investors’ holding period and the company’s financials and prospects.

This article was originally written by Tomasz Tunguz, and republished with permission.

We use cookies on our website to give you the most relevant experience by remembering your preferences and repeat visits. By clicking “Accept All”, you consent to the use of ALL the cookies. However, you may visit "Cookie Settings" to provide a controlled consent.
Cookie SettingsAccept All
Manage consent

This website uses cookies to improve your experience while you navigate through the website. Out of these, the cookies that are categorized as necessary are stored on your browser as they are essential for the working of basic functionalities of the website. We also use third-party cookies that help us analyze and understand how you use this website. These cookies will be stored in your browser only with your consent. You also have the option to opt-out of these cookies. But opting out of some of these cookies may affect your browsing experience.
Necessary Always Enabled
Necessary cookies are absolutely essential for the website to function properly. This category only includes cookies that ensures basic functionalities and security features of the website. These cookies do not store any personal information.
Non-necessary
Any cookies that may not be particularly necessary for the website to function and is used specifically to collect user personal data via analytics, ads, other embedded contents are termed as non-necessary cookies. It is mandatory to procure user consent prior to running these cookies on your website.
SAVE & ACCEPT

Let us show you why.

TO PEERS AND MARKET LEADERS

Our mission is to help SaaS and Software companies significantly improve operational performance with accurate and comprehensive benchmarks and analytics. SaaS Finance executives use OPEXEngine for:

Companies that benchmark consistently perform better than those do not according to research. SaaS and software companies use OPEXEngine benchmarking to make well informed planning and strategy decisions, give themselves a common discussion framework to rally internal teams and find opportunities to drive operational excellence across their organizations.

OPEXEngine has been the industry-leading benchmarking solution for software and SaaS companies for over 15 years, working with hundreds of venture-backed, IPO, and public companies—and never has had a breach. At OPEXEngine, we take the confidentiality of our customers’ data very seriously. OPEXEngine will not disclose or sell individual company financial data or any data relating to a participating company’s business operations, with the exception of publicly available financial information previously released to the SEC.

The value of Benchmarking

TAKE ME THERE
SEE MORE VIDEOS

Investing Sales and Marketing dollars in retention vs acquisition – How much?

In today’s market, the path to growth for B2B SaaS companies is to continue following the two SaaS lodestars:  customer acquisition and customer retention.  The companies that successfully navigated through various market disruptions, including the recession in 2008,...

This first review looks at trends in SaaS financials, P&L expenses, and invested capital for private SaaS.  During the month of June, we will review changes we are seeing in customer-facing operations, R&D ROI, and human capital management.